The first local ESSA@work meeting in the Netherlands was held on February 7th and 8th of 2017 at the TU Delft, The Netherlands. The purpose of this small, local meeting was to provide space for researchers working on a multitude of topics to unite and discuss their common interest, creating agent-based models. 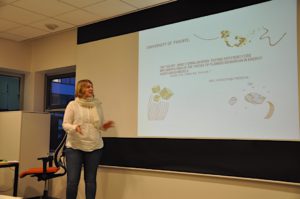 In addition to providing a space for discussion of ABM methods and feedback on current work, we wanted to give attendees the opportunity to get to know fellow modelers for future exchanges and collaborations. During this one-and-a-half-day workshop, the modelers presented their work in virtually any state to all other participants, including three experts, and held discussion groups based on the group’s demands and led by the experts, Emile Chappin (TU Delft), Virginia Dignum (TU Delft) and Wander Jager (RU Groningen). 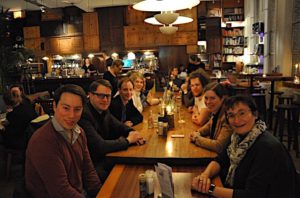 At the end of the first day, participants and experts continued their discussions around food & drink

Most of our local ESSA@work meeting were indeed local, coming from all over the Netherlands. However, a few travelled to Delft from other countries such as Germany, Great Britain and Iceland. Topics presented ranged from citizen participation over stock market models and energy systems to more theoretical work such as questions regarding the parametrization of ABMs, and multiple formalizations of the same theory.

The participants introduced their work in 15 minute presentations, followed by discussion and feedback from the team of experts, and a final round of general questions from all participants. While not all participants “officially” presented their work, the frequent breaks were filled with lively discussions of our common work, exchange of literature recommendations, and hints and pointers to improve our models. 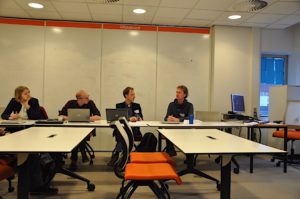 These discussions continued into the evening of the first day, over dinner and beer.

The second day saw first another round of presentations, following the same form of the first. By lunch, 14 of the roughly 30 participants had presented their work. In the afternoon, three groups were formed around common questions and interests, such as model validation, theory constructing, and good practices in agent-based modeling.
Overall, both presenting and non-presenting participants were provided with learning opportunities, and expressed interest in future local ESSA@work meetings.